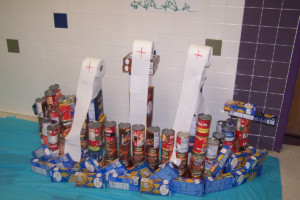 This project depicts the Santa Maria, part of the Nina, Pinta and Santa Maria Can-gineering project. Photo by Donna MacKenzie

Last year, the students at Honeoye Falls-Lima’s Manor School collected 1,627 cans and boxes of food during their annual Can-gineering event, which is held the day before the start of Thanksgiving Recess. This year, the second-grade, third-grade, fourth-grade and fifth-grade students outdid themselves by donating 2,457 cans and boxes of food which will be shared between the Honeoye Falls and Lima Food Cupboards.

Manor School’s Make A Difference committee, composed of fifth-grade students, once again helped organize the event and the total was revealed at a ceremony in the school’s gym on November 26. The ceremony first recognized those students who received an award for demonstrating the school’s “Habit of the Mind” behavior which was accuracy. The “Habit of the Mind” are an identified set of 16 problem solving, life-related skills, necessary to effectively operate in society.

Following that and the announcement of the amount of cans and boxes of food collected, awards for the Can-gineering event were presented.

“Can-gineering is a wonderful event for the students,” Manor Principal Jeanine Lupisella said. “The students use their STEAM skills. Their engineering skills are used in designing and building their projects, their art skills are used in making sure that if something has to be a certain color that they collect cans with that color prominent in the labels and their math skills in figuring out how many cans or boxes of food that they will need to building the projects. They often connect the projects to something that they are currently studying such as Native Americans and the legend of the Three Sisters or Christopher Columbus. The wonderful thing they learn is sharing and giving to others who aren’t as fortunate.”