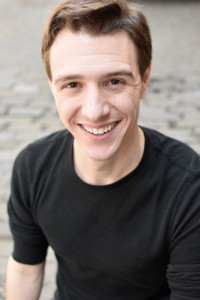 In Rochester, you don’t have to go to the big cities to enjoy and celebrate the arts, sometimes you have to look just around the corner. Michael Radi, HF-L Class of 2006, is a local composer/writer/actor who is debuting his new original musical The King’s Legacy at the Bristol Valley Theater.

The King’s Legacy follows King Henry VIII’s obsessive quest for a male heir as he careened through six wives, palace plots, beheadings and a confrontation with the Pope. And nearly tore his country apart. But it was his daughter, Queen Elizabeth I, who changed the world. A thrilling musical journey through the intrigue of the Tudor court.

We chatted with Michael about how he discovered his passion for theater and about what to expect from his original musical.

Q: Where did you go to college? What did you study?
A: I attended SUNY Geneseo and graduated in 2010 with a B.A. in Theatre-English with Honors. It’s a unique major that allows you to study English from a theatrical perspective, as well as Theatre from an English history perspective. I think it ultimately helped lead me down my path to musical theatre writing, though that was not my original intent in choosing the major.

Q: When did you realize you wanted to work in music/performing arts?
A: The performing arts bug caught me at a very young age, and I knew that I definitely wanted to keep the arts in my professional life. Originally when I was looking at colleges I wanted to find a place where I could double major with Theatre (or English and Theatre) and Education, which is what I did at Geneseo at first. However, about halfway through my undergraduate I realized that what I really wanted more than anything was to be in the professional theatre. Luckily, I had acquired some additional skills through my activities at Geneseo that allowed me to pursue more than just performance, though I do absolutely adore performing. Eventually, it led me to becoming a Musical Director, Vocal Coach, Composer, Lyricist, and Librettist.

Q: How did you find your way into writing original compositions?
A: As a young piano student and lover of music – and particularly musical theatre music – I found that I thoroughly enjoyed sitting at the piano and just tinkering. Sometimes I would play more popular music from musicals or the pop world, and other times I would just make things up for fun. Then in fourth grade, my elementary school music teacher encouraged me to write an actual piece of music, so I did! It was pretty short and only for piano, but that was my first piece of composition ever. And I still remember it! In high school at HF-L I took my first Music Theory course, which reignited my love for writing, and I began to write music again. By the end of high school I had written a piece for band (and attempted to orchestrate it as well), a score for a horror movie we made as an English class project, and a few little songs in more of a musical theatre style, just for fun. It wasn’t until college that I began experimenting with other skills like a cappella arrangement, lyric writing, musical theatre songwriting, and orchestral orchestration.

Q: What do you write first the melody or the lyrics?
A: Writers get this question a lot! I wish there was a clear-cut answer, but it completely depends on what I’m writing and with whom. Sometimes I collaborate with a composer or lyricist, which will definitely change the process. But when I’m writing as the sole composer-lyricist – as with The King’s Legacy – it usually depends on what is called for by the song or the character. For instance, in a solo moment that is going to be a journey of some kind for that character, I would usually write the lyric first. It’s incredibly helpful to have a specific sense of where the character is at the start of the song, where they are at the end, and how they got there. The lyrics can then dictate what the sound of the song is going to be, what type of melody will fit the rhyme scheme, and whether the song will be building in intensity or breaking down into something more simplistic. However, with a group number or a big opening moment, I usually begin with the music. It helps to set a tone for that moment with musical motifs or specific sounds, and then to build from there into who is singing, why, and when. As I said, it can go either way!

Q: What did you learn back in high school that you think has helped you with you career?
A: Oh boy – everything?! HF-L is such an insanely wonderful school district with top-notch teachers that I consider myself incredibly lucky to have gotten my education here. My English teachers taught me how to write, for which I cannot show enough gratitude. And I don’t just mean that in the way of spelling and grammar – those certainly count as well. I was taught how to break down a piece of writing, whether that be a novel, short story, play, poem, etc. into its most basic components and see what methods the authors were employing or creating in order to get their points across. I was shown how to use literary devices in ways I wouldn’t have otherwise thought. And, I think most importantly, I was taught how to create a thesis and prove it through the use of language. That’s really what theatrical writing is: a character has a thesis (or a great desire) and by the end of the show it has either been proven or disproven. I certainly could not do what I do without having been given these skills.

On the music side, I don’t even know where to begin. Between Mr. Goold and Mr. Borden I was taught so many different skills. Not only how to play clarinet as part of an ensemble, or sing in large and small group settings, or how to play keyboard in a jazz ensemble. They also taught me musicality and the joy of performance. They helped teach me the basics of music theory, composition, arrangement, orchestration, a cappella, classical music, movie scores, and so much more. Because I was a singer who played piano, I was given my first introduction into the world of vocal accompaniment, as well as given the occasional opportunity to lead the choir. There is an entire world of musical knowledge that I did not have before HF-L, and I am so grateful for all that I learned here.

And that’s not even to mention the performance skills I gained through working with directors like Lorie Dewey and Sue Palomaki! The lessons they taught me about confidence, theatricality, scene work, blocking, choreography, and stage presence became the basis for my continued interest in performance after high school. Looking back on my time here, I know that I landed exactly where I was meant to be.

Q: What do you love most about Rochester?
A: This one is easy – I’ve never been anywhere else in this country (other than NYC) where the arts are so well integrated and appreciated in the communities. I grew up in Binghamton, NY and moved to HF-L just before my Sophomore year of high school, and it was mind-blowing to me how many opportunities exist here. And not just in educational settings, but for careers and for hobbyists as well. The theatre scene here is a beautiful community of people creating fantastic work, and it’s a scene that I miss dearly. The amount of music in the area and opportunities for young people are so expansive that you know there is a place for anyone who wants to pursue their art form. This embrace of the arts is unique to Rochester and I absolutely adore it.

Q: Any piece of advice for someone who wants to write their own songs?
A: Do it. Write. The only way to learn is by trying it yourself. Of course you can do research and learn the proper way to write certain types of music, but at the end of the day, if there is a song in you, you are the only person who can make it a reality. Don’t be afraid of failure, it’s the best way to learn and grow. And remember that no one writes something perfect or great (or even good) with their first draft. That is what the revision process is for. But really, just start writing and you will learn and grow from there.

Q: Your show, the King’s Legacy, what is it about? How did you come up with the idea?
A: The King’s Legacy is a celebration of women’s accomplishments against all odds in an oppressively patriarchal world, told through the story of the wives and daughters of Henry VIII. The show portrays how Henry’s obsession for a son tore his country apart, and how his daughter with Anne Boleyn, Queen Elizabeth I, unexpectedly saved them all. The musical is performed by a small troupe of Players in honor of the fortieth anniversary of Queen Elizabeth I’s celebrated reign (London, 1598) and spans thirty-three years between two story lines. The present consists of Henry’s attempts to obtain a son, while Anne Boleyn seizes all opportunities to forge her own path, and the subsequent consequences for Catherine of Aragon and the English court. The future centers on Henry and Anne’s daughter, Elizabeth, as she grows up and learns how to become a great monarch through her mother’s legacy and Henry’s later wives.

I originally thought about the idea of writing a musical based on Anne Boleyn and Henry VIII long before I was writing musical theatre at all, but it was just after college that the idea began to haunt me again. It’s such an incredible, singular, and powerful story, which can be seen in the fact that it has been adapted so many times in books, film, TV, and straight plays. For me, this great irony that Henry felt he must have a male heir in order to have a lasting legacy, and yet it was his daughter from his second wife who became the Golden Age Queen (Elizabeth I) was the perfect opportunity for a musical to develop. And particularly because that second wife – Anne Boleyn – was someone who created her own opportunities and rose and in a way that no women had done, or was allowed to do, before. These people changed the course of history with their desire to overcome their natural obstacles, and I thoroughly believe that their stories need to be told and can inspire all of us.

Q: Do you prefer being behind the scenes or being on the stage?
A: On stage! Always. As much as I adore being a writer and a musical director, nothing beats the feeling of putting on a character and living in someone else’s shoes for a while. There is a freedom and a rush that I’ve never been able to find anywhere else.

Q: If you could collaborate with any living artist, no matter the genre, who would it be?
A: Stephen Sondheim, hands down. Even if it were on 8 bars of music in 1 song, to be in the presence of that kind of genius, intellect, and vision and hear his thought process would be an invaluable gift. He is unmatched as a musical theatre writer and is one of my greatest inspirations.