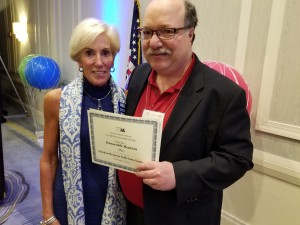 Sentinel Publisher Christopher Carosa With NY Press Association’s Executive Director Michelle Rea and the award recognizing the Sentinel as an Honorable Mention in the Editorial category of the 2017 Better Newspaper Contest. photo by Betsy Carosa

This past weekend at its 2018 Spring Conference, the New York Press Association awarded Mendon-Honeoye Falls-Lima Publisher Christopher Carosa “Honorable Mention” in Division 1 for Best Editorial. The judges said: “Perhaps more at home in the column category, these entries still distinguish themselves with their strong voice and writing, their depth of knowledge, and their focus on issues of local importance.”

Here are the links to the winning articles: