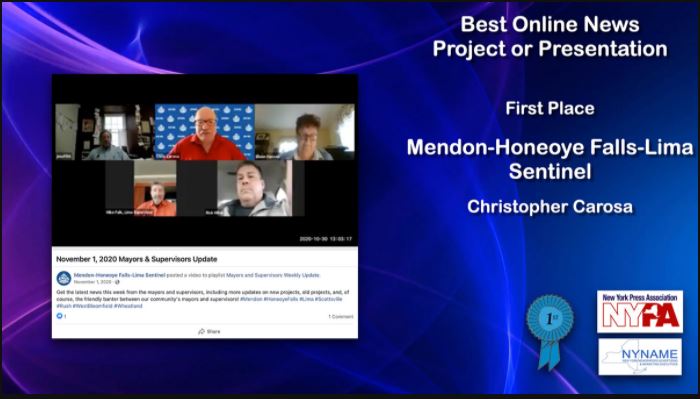 During the height of the pandemic in April of last year, when there was much uncertainty among residents as well as elected officials, the Sentinel launched a weekly “Mayors & Supervisors Update.” Initially broadcast live on Facebook and YouTube via Zoom on Sundays at 1:00pm, the video news program was meant to ease citizen concerns while at the same time provide an opportunity for the administrative officials in the Sentinel’s coverage area to engage and interact with each other as they shared questions, answers, and common experiences.

Very quickly the broadcast began to do much more than that, as elected officials saw it as an opportunity to answer well beyond the original Covid scope and do so on a timely basis.
“The Sentinel video portion of our weekly ‘column’ is another tool the Town of Mendon is utilizing to inform our residents,” says John Moffitt, Supervisor, Town of Mendon. “This venue has proven to be extremely efficient in our communications.”

Today, the broadcast is taped live via Zoom on Friday afternoons and broadcast on the Sentinel’s FaceBook Page and YouTube Channel every Sunday at 1:00pm. Each week, the mayors and supervisors from the Towns and Villages of Mendon, Honeoye Falls, Lima, Rush, Scottsville, Wheatland, and West Bloomfield are invited to appear on the show and provide a live update.

Although scheduling conflicts often make it difficult for certain officials to attend, the show usually has six officials make their reports, all in less than a half hour.

It has proven a very effective way to announce the news of our towns and villages, with broadcasts often being viewed by hundreds of people. (Some even leave comments!)

“As I continue to look for options that will inform our population it is obvious this broadcast is a viable method,” says Gerald Kusse, Supervisor, Town of Rush. “I know that based on the feedback I receive from residents, especially our senior citizens.”

This now year-long effort recently received major recognition across the State when the New York Press Association announced at its annual convention that the Sentinel’s Mayors & Supervisors Update was awarded First Prize in the NYPA’s 2020 Better Newspaper Contest.

In awarding the prize, the judge said, “I’m not sure if this weekly roundup was developed before COVID or after COVID, but it was a good idea either way. It had the right number of participants, the pace was brisk, the questions and answers were relevant, and it achieved what it wanted to do in under 30 minutes. Well done.”

Frequent participant and Mayor of Scottsville Eileen Hansen, says “First, congratulations to the Sentinel on that first place in best video project. How wonderful! I know these meetings have been a help to me and seeing what’s going on in other municipalities and kind of collecting my thoughts at the end of the week, too, as well as giving information to our residents. So, congratulations and thank you for this platform for us to do this.”

The Sentinel wishes to thank the mayors and supervisors, too, since, without them, this broadcast would not be possible. So, in a way, they’ve been awarded a hardy “well done” too!