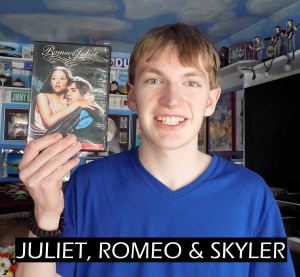 RESET ~ We spent last week with Deanna Haller who is the owner of Savvy Nails, a new business which just opened up on my property. If you can visualize the 4-corners area of the hamlet, on the south side of Rush Mendon Road, the Carosa/Sentinel building is the 3rd door down from the light, I am in the 4th door and  Savvy Nails is in the 5th door down; in the little blue building that sits up close to the road. Last week we started off with me asking Deanna about the funniest thing she remembers about having my father as her high school English teacher. She told me that it occurred when they were reading Romeo and Juliet. Dad showed them the 1968 Franco Zeffirelli movie, little by little, as the class read the play.

I put on my film critic hat and was sharing some background on the film. Zeffirelli had tried to test the limits of how much sexuality he could get away with and still maintain a PG rating. And piggy backing on this, I told you all that I was going to break new ground and embark upon my two-week foray into “Skyler Smith’s Tour of Medieval Breasts”. If that doesn’t get you scurrying for last week’s issue, nothing will.

At any rate, that was where we left off last week, and I know Deanna has been chomping at the bit all week long, so let me get to the climax and release the tension that I know has been gripping my audience as well.

THE PLAY’S THE THING ~ Romeo and Juliet were both young teenagers and while the fact that they get married seems bizarre by today’s standards, as Dad has explained to me, it would not have been extraordinary during medieval times. Life expectancy was shorter, so people got married earlier and had children earlier.

BOYS AND GIRLS ~ In pushing the sexual envelope, Zeffirelli threw out a caveat for each gender. When Romeo gets up that morning he walks away from the bed to the window. You’ve heard the term full frontal nudity; well what you see on the screen would be the exact opposite of that. It’s a bare butt bonanza.

Juliet was played by the amply endowed Olivia Hussey and, for a split second, when she gets up to say goodbye, her bountiful breasts spill out of her robe and, let me put it this way, if the movie had been made in 3-D, some people in the front row could have been seriously injured. While the view lasts only a split second, for the 14 year old boys in that classroom it was a second that may have lived on for hours, or days, or weeks.

FUNNIEST MOMENT ~ Deanna said that when Dad was wrapping up class, he would usually close by asking if anybody had any questions. And Dad shared that the end of class, on what became fondly remembered as the Day of the Bouncing Boobs, was always a little different with the kids kind of looking at each other waiting and wanting to say something about the risqué shot, but not knowing how to do it without coming off as crude or crass.

So usually nothing was said, the bell rang, and the kids went on their way. But not in Deanna’s class. That crafty class clown Sean Wright finally came up with the perfect way to refocus attention on the scene in question and not get in trouble for it. Sean raised his hand, and with perfect timing and delivery said, “Mr. Smith, was Juliet really just 14 years old?”