Community Band Glad to be Back

Home Community Band Glad to be Back 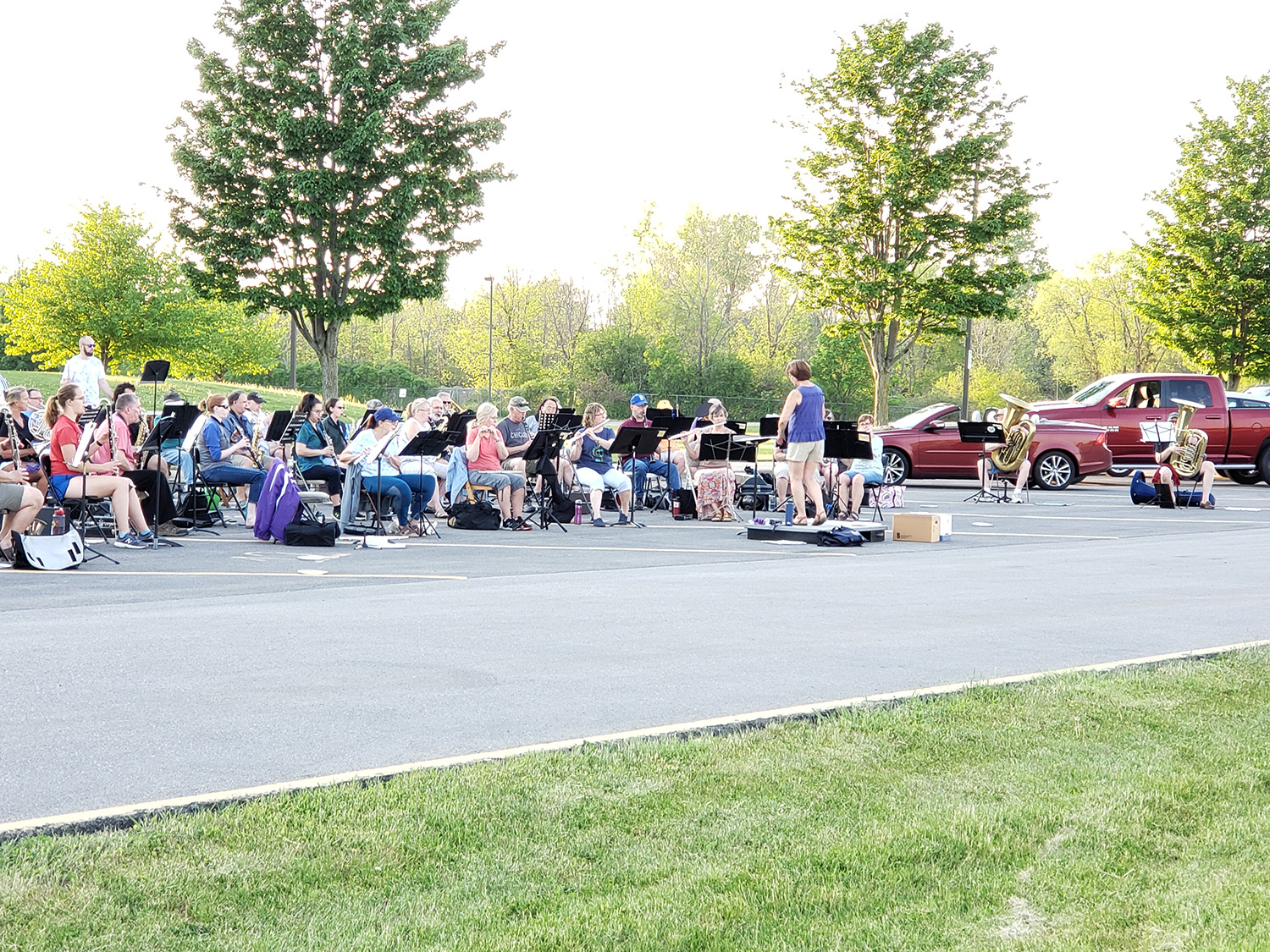 When a Seattle-area church choir practice became the first “superspreader” event last year, music groups everywhere took notice. Our own Honeoye Falls Community Concert Band (HFCCB), ably lead by Lindsey Borden, suspended rehearsals and canceled its spring concert. After 32 seasons of continuous musical engagement, including weekly rehearsals and up to eight gigs a year, band members had to stay home like everyone else. As Fred Parker, one of our tuba players, put it, “I was grateful that the Board decided to suspend rehearsals when the pandemic hit. We protected each other, our families, and the many towns represented in our membership.”

The nature of horn playing in close quarters presents unique challenges, especially indoors. Since most HFCCB members skew to the more vulnerable age brackets, concern for spreading the COVID-19 virus was high. Many players who work in medical fields, including nurses, doctors, lab scientists, and others, dealt daily with exposure threats in essential work settings. Because of the ongoing danger of spreading disease droplets by simply blowing a horn, band members were worried if we would ever get back together. Desperate to play music together, some band members played once in late summer 2020 with socially distanced seating and masks on when not playing, outdoors on a beautiful breezy day at the Honeoye Falls Fireman’s Field.

Support was high for following the science. When a consortium of performing arts associations sponsored a study – the Performing Arts Aerosol Study – conducted at the Universities of Colorado and Maryland, our members devoured each release of preliminary results. Musical instruments emit aerosols (potentially virus-laden) at different rates and in different directions: flutes sideways, clarinets and oboes through multiple holes, trumpets and trombones via bells and spit valves, and so forth. Nationally, band teachers at all levels looked to new devices and strategies. Bell covers, masks with slits for mouthpieces, even whole-horn sacks for the saxophones, handmade at first but eventually mass-produced and sold online.

Most school band rooms, including the HF-L High School band room where the HFCCB rehearses, needed to upgrade air conditioning systems to replace all the air in the room at designated intervals per CDC standards. HF-L did in fact modify the AC in both the band and choir rooms to comply with those updated CDC standards and, basically, the systems now provide more fresh air than before. These efforts and concerns swirled about in the early-testing, pre-vaccination timeframe. September 2020 came and went with most schools moving to online learning. Some bands considered Zooming with click tracks.

What’s a click track? That’s right, it’s a virtual metronome that allows geographically dispersed musicians, or a single musician, to put together a musical presentation. For example, in December 2020, HFCCB reed man Brad Willard put together this YouTube production of Don’t Stop Believing (https://www.youtube.com/watch?v=iDBH7ueiI3s) to illustrate his indomitable will to keep playing during the pandemic. (Click the link or search YouTube for “Brad Willard” and “Don’t Stop Believing.”)

By January this year, the HFCCB began considering a return to rehearsals. The science suggested it was still unsafe to play indoors, even with slit masks and bell covers. We looked for larger indoor spaces to allow for six feet between players, nine feet for trombones. The HFCCB board considered school gyms, abandoned warehouses, and even large barns to no avail. Fairer spring weather offered our only hope, outdoor rehearsals. Finally, we settled on the HF-L Middle School bus circle outside the District Auditorium, where much of our percussion equipment is stored. With some fanfare and a nice rainbow, rehearsals began in May, vaccinations expected. We played our first concert since December 2019, on June 26th at Harry Allen Park. A final summer concert will be performed at the park on July 31st at 7 PM.

How does it feel to be back? Euphonium player Mark Borden may have said it best: “So often, making music together is less about the ‘music’ and more about the ‘together.’ The pandemic left such a long void in this regard, and it’s great to be able to share this common joy once again.”