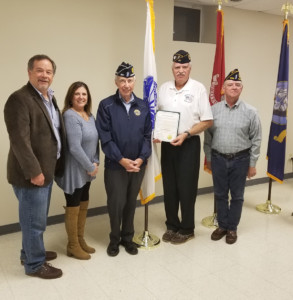 The Falls Post #664 received a 100th year proclamation from the Monroe County American Legion at its meeting on October 10.

The American Legion approved an Interim Charter for Falls Post 664 on October 23,1919 with a Permanent Charter issued on September 17, 1920. The Commander of Falls Post 664 in 1919 was Harry Lay, followed by Commanders Elston Sheppard in 1921 and Raymond Francis in 1925.

On April 24, 1957, Fred and Bernice Wolfsberger decided to donate the land that Falls Post 664 occupies today. Building Construction started on May 6, 1957 and it was Dedicated on May 10, 1958 by the Honorable Kenneth B. Keating. Throughout our 100 years of existence Falls Post 664 membership included Veterans who served in WW1, WW11, Europe, Korea, Vietnam, Iraq, Saudi Arabia, Afghanistan and many more conflicts too numerous to mention.

Falls Post 664 continues to thrive today by supporting programs like Boy’s State, Boys Scouts, Pancake Breakfasts, Poppy distribution, Flag Day and Lap Robes for Veterans. Additionally our Honor Guard is available for Veterans’ Funeral Services, Memorial Day and Veterans Day events. Falls Post 664 also marches in H.F. School and Fire Department parades, as requested by the Honeoye Falls and Mendon Communities. We are proud to have been able to reach our 100th year within the American Legion. We pledge to continue to support programs and goals identified by the American Legion as beneficial to USA Veterans and their families.