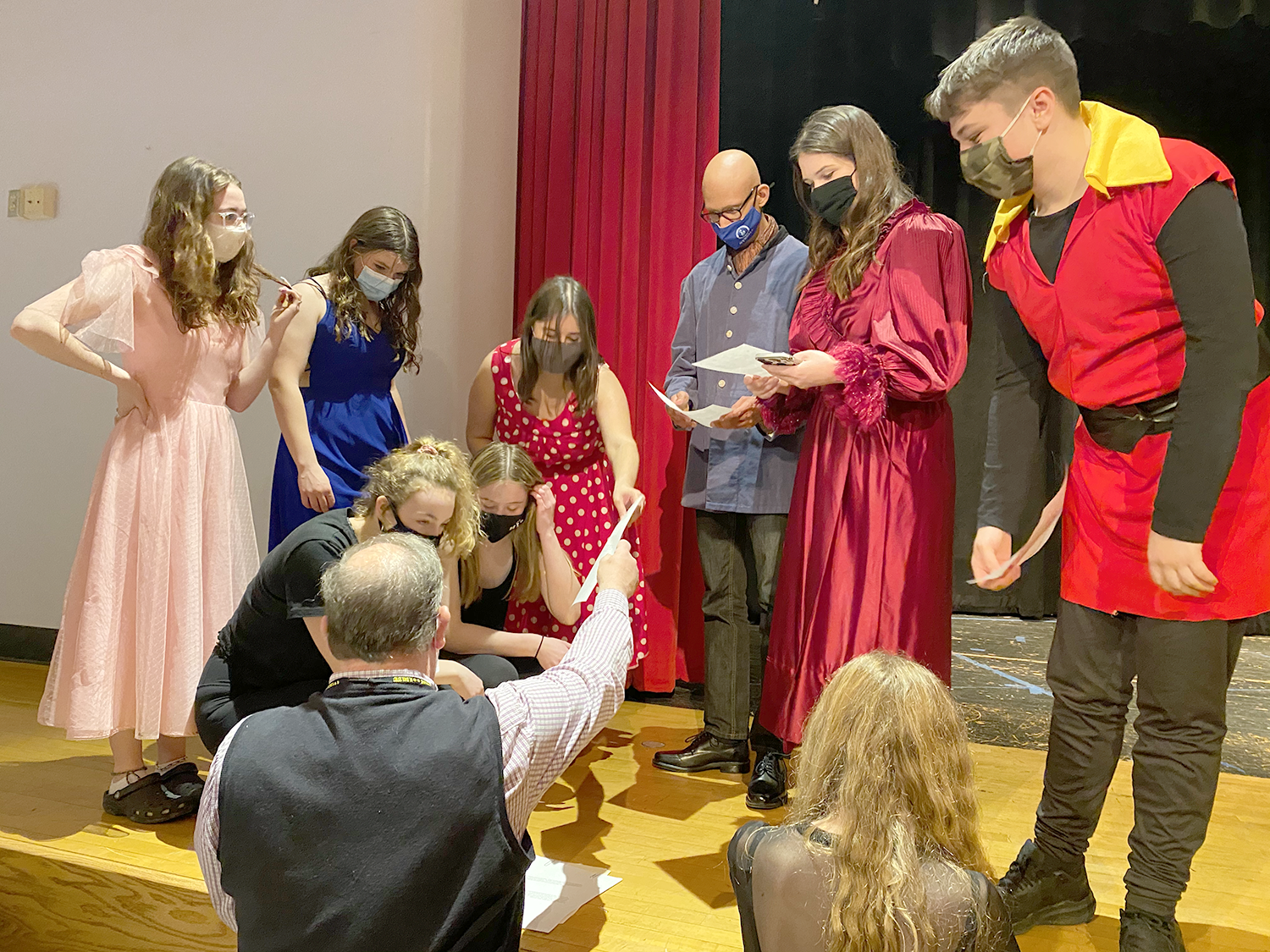 Artistic Director John Hennessey and the cast of Broadway Unmasked 2021 are shown here during a rehearsal. Photo by Ken Goold

Handed lemons with the cancellation of the 2020 musical Bye Bye Birdie and the inability to do a regular musical this spring, the students in the Honeoye Falls-Lima Drama Club and artistic director John Hennessey and vocal director Ken Goold have made lemonade with a unique virtual musical revue called Broadway Unmasked 2021. The virtual revue will be dropped on the HF-L High School Music 2020 and Beyond YouTube channel on May 1.

Bye Bye Birdie was only two weeks from being presented when COVID-19 shut down schools last March. Originally, it was hoped it would only be postponed until June, but the ongoing pandemic forced its cancellation. Then, it was hoped that maybe it could be presented as the 2021 show since only six seniors from the Class of 2020 (Audrey Natale, Zetta Hayes, Sydney Picciotti, Dominick Abraham, Evie Manchester and Melissa Price) were in the show. However as the 2020-2021 academic year got underway, it was obvious that wasn’t an option either.

John Hennessey, artistic director of the High School Fall Drama show and the Spring Musical, and vocal director Ken Goold, who also directs the choirs at the high school, were determined that the students should have a creative outlet for their talents. So, they decided on a musical revue.

“It’s been a huge undertaking, but we are really pleased with how things turned out,” Hennessey said. “The kids got some sort of normalcy. In many ways, this was Ken’s baby. I came along for the ride by staging everything.”

Hennessey and Goold worked through the selection of songs last fall, cutting down an original list of 80 to the 30 which are a part of the show. Auditions were then held in December, the same as they would have been for a normal musical. The students then had 10-15 hours of rehearsals a week, starting in January through April 7.

“We made sure the kids were always six feet apart,” Hennessey said. “They learned all the music and staging and dances in January with the masks on. We never had more than eight kids together at one time when they were singing. None of the singing is live; every song was recorded with the kids having the masks on unless they were doing a solo so they were in a room by themselves.”
With the school choirs having class in the high school auditorium, the chorus room was turned into a recording studio with mikes with another small room set up for the solos. Once the songs were recorded, school officials gave the green light for the filming with the students lip-synching every song.

“We started filming in mid-February and each song was filmed at least five or six times as Mr. Goold did the camera work and filmed each number from different angles,” Hennessey said.
About six songs were filmed each week. The kids would be filmed lip-synching with the masks off, then filming would stop and the kids would put their masks back on. The finale was filmed just last week.

The opening and closing photo montages which will be seen are the collaboration of four students. Torregiano and Yelencsics did the photography while the montages were put together by Brongo and Coria.

To give the feel of how the number might have appeared in the original Broadway production, each number was staged with costumes put together by Lisa Fisher or borrowed from area theatre groups such as Pittsford Musicals and David Fisher put together a few set pieces.

“The kids have had a great experience,” Goold said. “It’s been challenging and rewarding. We found a way to overcome the pandemic restrictions put in place for safety reasons and created a unique audio-video project that showcases the talents of our student performers.”

The production, which organizes the 30 numbers by each decade from the 1940s to the 2010s, also features 11 “speeches” where the seniors discuss the songs and shows covered in a certain decade and that decade’s fads and trends.

“We have some Broadway standards from well-known shows, but also introduced some lesser-known songs from shows that aren’t as well-known to the students,” Hennessey said. “We talked to the kids about each show. Our goal was to do something for the kids; it may not be what we would have wanted but the kids have learned a lot about recording and every kid in the show has their moment to shine. We’re proud of the finished product.”

Due to COVID-19 restrictions, there can’t be any public performances so that is why the production will be dropped for free on Saturday, May 1 at 10 a.m. on YouTube. The cast, crew and production team will view the production on April 26 in the high school auditorium and family members of the cast and crew members will get a family screening (two tickets per student at no cost) on April 29. A short trailer of the production can be viewed below.