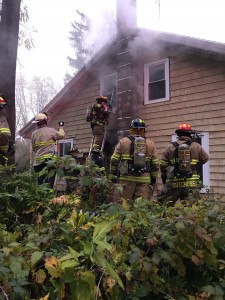 Shortly before 6 p.m. on October 19, Honeoye Falls Fire Department firefighters were requested by the Lima Volunteer Fire Department to assist them for a working fire on Ideson Road.

Fire personnel from Engine 562 & 563 acted as the Rapid Intervention Team and also assisted in fire suppression of the chimney fire.

As the cold weather falls upon us, it is imperative to have your chimneys properly cleaned and inspected to prevent creosote buildup. This tar like substance is very flammable as the temperature in your chimney increases causing irreversible damage that could potentially lead to a fire.