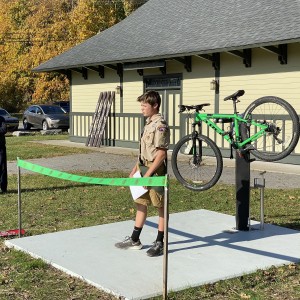 Bicycle Repair Station Ribbon Cutting
The weather on Friday, October 23rd was balmy and clear — a perfect day for an outdoor ribbon cutting.

Preston Yates’ Eagle Scout project — the first bicycle repair station installed along the Lehigh Valley Trail — brought a crowd of people to Rochester Junction that afternoon from around the community and from Monroe County Parks.

Mendon Foundation President Drew Saur opened the celebration with an homage to the project’s spiritual father, past Mendon Foundation President John Farrell. John’s fondness for cycling around the country led him to see these bicycle repair stations in his travels, and during his time as President, he wanted to see these added along our Trail. John was unfortunately traveling and unable to be present.

Monroe County Parks Director Patrick Meredith spoke at length about the fine work that Preston did to see the project through, including the remarkable raising of over $2,500 as well as getting Lakelands Concrete to donate the concrete base pad. He noted how valuable the repair station would be for all sorts of issues, including tires that are often flattened from the coal slag underlying the Trail’s stone dust covering. 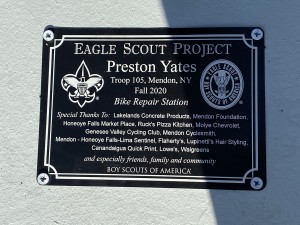 Town councilman John Hagreen represented the Town of Mendon, and praised the project’s significance to the Trail and to our community, speaking at length about the Yates family.

After Preston himself spoke and thanked the various donors and people who helped move the project along, Patrick Meredith presented an official proclamation to Preston from County Executive Adam Bello. The ribbon cutting immediately followed.

The project’s usefulness to cyclists using the trail couldn’t have been more apparent than the day that Preston and his volunteer crew finished the project a few weeks ago, when a cyclist used the newly-installed repair stand just as the crew settled into their cars to drive away.

A second bicycle repair station Eagle project — this one at Mendon Station Park — is coming next. Stay tuned for more details!