Manor second-graders show off knowledge of the U.S.

Home Manor second-graders show off knowledge of the U.S. 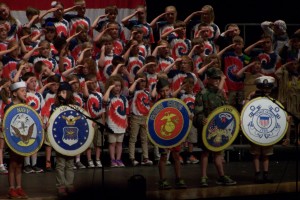 Manor School second-graders hold medallions depicting the logos of the branches of the U.S. military during their Flag Day production. Photo by Donna MacKenzie

Once again this year, the presentation was tweaked a little. “We Love the USA” was performed by all the students as they marched into the District Auditorium from the back of the theater. Mrs. Fleming’s class presented “The United States” which still featured each of the 50 state names but was different from previous years’ when students sang “The 50 Nifty United States”. Mrs. Leonard’s class sang and used sign language to perform “The Star Spangled Banner”.

The presentation concluded with all the second grade students singing “Proud to be an American”.