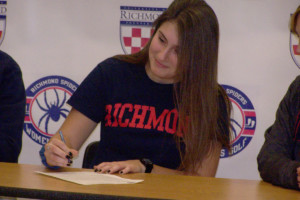 When she first started playing golf, Claire Yioulos probably agreed with the title of John Feinstein’s 1995 bestseller about the sport, A Good Walk Spoiled. But, the Honeoye Falls-Lima senior certainly wouldn’t agree with that sentiment now.

Yioulos signed a letter of intent to play golf with the University of Richmond at the NCAA Division 1 level last Wednesday afternoon. The two-time All-Greater Rochester selection and this year’s All-Greater Rochester Player of the Year in Girls Golf has played on a merged team with Victor for four years because HF-L does not have a girls golf team. Some of her Victor teammates and Victor coach Trevor Sousa were present at the signing ceremony along with her family and friends from HF-L and Yioulos got a bit emotional about that support when she spoke after she signed the letter of intent.

Yioulos, the daughter of Linda and Ernie Yioulos, would like to major in finance at the University of Richmond. She also considered LeMoyne, Austin Peay and Winthrop University.

“Originally, I thought of going to a bigger school with a bigger enrollment,” Yioulos said. “But, coming from a small school in high school, when I visited Richmond, it just felt right. It felt perfect for me. I had previously met two players from Richmond and I know the coach can help me over the next four years.”

While she had a fine junior season, tying for 11th at the New York State Public High School Athletic Association Tournament last June, and earned All-League first team, All-Greater Rochester first team and All-State first team honors, Yioulos didn’t always have a love for golf. In fact, when she first picked up a golf club at age 10, she didn’t like the sport.

“I hated golf at first,” she admitted. “It just wasn’t fun. But, some friends of mine helped turn those feelings around and, once I got into it, I really began to love it and enjoy it. I like the competitiveness of golf and I have also learned a lot about resilience and persevering through bad shots.”

Yioulos began playing competitively at age 13. As an eighth-grader, she played as a team-of-one and went to meets with Pittsford’s team. HF-L and Victor agreed to a merged team arrangement and Yioulos began playing with Victor as a freshman. Coach Sousa recalled the first day Yioulos came to practice: she hung back in the car until her mother convinced her to join her new teammates. That decision led to much success for all. Victor has won two straight Monroe County League Championships, going 13-1 this past fall when it also finished second at the Section V Tournament as a team (it won the Section V Team Tournament in 2018). For Yioulos, she was the medalist (lowest scorer for all golfers) in seven matches this past fall and won the Monroe County Tournament of Champions with a 38 at Monroe Golf Club. A co-captain of the team this fall, she won the Section V Tournament after shooting a 78 with birdies on holes 2 and 10 at Greystone Golf Club and followed that up the next day with a 76 at Brook Lea Golf Club to win SuperSectionals. Her two-day total of 154 was nine strokes better than the runner-up.

A long hitter off the tee, Yioulos said that her short game is probably her strong suit right now. Hitting into the green is what she has to work on. According to Sousa, Yioulos has what it takes to continue that hard work.

“It’s been wonderful seeing the kind of golfer, teammate and person that she has become,” said Sousa at the signing ceremony. “She is the first girl from our program to play golf at the college level. This is the culmination of a lot of hard work and I know that she knows that going forward there is more hard work. I am very proud of her.”

Asked to reflect on her success in high school, Yioulos talked more about the team than herself.

“Looking back, I think about my teammates,” said Yioulos, who says Rory McIlroy is her favorite golfer overall while Brianna Do, whom she met and played with at the Danielle Downey Pro-Am when Do was here playing on the Symetra Tour at the Danielle Downey Classic, would be a favorite woman golfer. “Winning sectionals was huge last year as a team and winning two straight league titles.”

Yioulos’ high school career isn’t quite over as she will play in the New York State Public High School Athletic Association Tournament this June (June 5-7). Asked her goal for the tournament this year, she summed it up in two words: “Win it.”