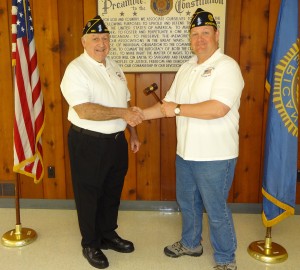 John Connelly (on the left) is the new commander. James Merzke, past commander, (right) is passing the gavel to him on June 8th at the Legion Hall. Submitted photo

Honeoye Falls Post # 664 is proud to announce its new Commander, John Connelly. Connelly had served in the Air Force. The post is also honored to have him be our new Commander. The previous Commander, James Merzke has served the post proudly for the past two years. He will still be active in the Post.