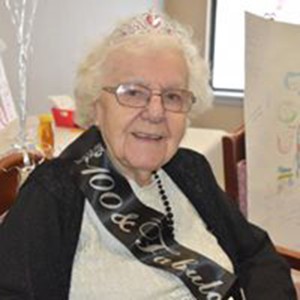 Erna was born in Simminau, East Germany. She grew up in this small town and married Adolf Kienert in 1941. Just before Erna’s husband went to war in the German Army, her son Gerd was born. During the war, Gerd and Erna had to flee to West Germany. Times were difficult. When the war ended, Adolf returned to East Germany to reunite with his family but they were not there. It took Adolf many years to find Erna and their son. Gerd was 11 years old when the family was united. Conditions were not good, so the family came to the United States in 1953 and the family lived in Albany. When they arrived, they did not speak English, so they went to school to learn the language. When Erna’s husband died, she moved to Victor, NY to be closer to her son. Erna is thankful for her blessings every day.

Episcopal SeniorLife Communities has been helping older adults live life to the fullest since 1868. Founded in 1868 on the Christian values of The Episcopal Church and its members, the Episcopal Church Home has been meeting the needs of our community with care and compassion for 150 years. We have grown into Episcopal SeniorLife Communities which now encompasses a variety of care, housing and community programming. Our focus on each individual makes us one of the most trusted providers of senior care in the Rochester area.