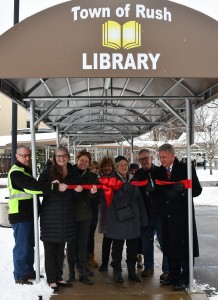 Local dignitaries get ready to cut the ribbon on the completed awning project. Submitted photo

BY DEB AND TIM SMITH
Next time you visit the Rush Public Library be prepared to bask in the newly installed protection from the elements. Two hundred feet of entryway sidewalk are now covered by illuminated awning. The Rush Public Library Awning Project was dedicated in a ribbon-cutting ceremony with Senator Rich Funke on Tuesday, December 17.

Ironically, last month we featured a picture of the ceremony laying the cornerstone for the Rush Town Hall in 1935. This picture appeared in our Roeser’s Rush Remembrances series which has run throughout the second half of 2019 and will culminate next week.

There’s a clear connection between the building of the Rush Town Hall 85 years ago and the new awning project. When the town hall was built, just south of the 4-corners intersection of Routes 15A and 251, it was logically designed to squarely face the “main drag” of Route 15A (aka East Henrietta Road).

The north side of the building originally housed the Rush Fire Department and efficiently getting vehicles out from there was much more important than getting people in. Fire trucks pulled out of the fire station at a 90-degree angle onto East Henrietta Rd. When the new fire hall was built in May 1971 that right side of the building was retrofitted to become the new home of the Rush Public Library.

It had an entrance facing East Henrietta Rd. and a very small parking lot in front, able to fit about five cars. It served the community well until 2003 when the Town Hall and Library were renovated and the Library entrance was moved to the back of the building. After the renovation, the walk from the parking lot to the Library was much farther and a source of frustration to some patrons. This did result in a rather funky rear entrance situation which Senator Rich Funke would help remediate.

Data from the last census shows that between the years of 2000-2010 the population of Rush residents over 55 has increased by 43%, even though the overall population of Rush actually dropped by 3.5% during that time. (Also during that same decade the under 55 population decreased by 16%.) So we can say that Rush is tipping toward being an elderly population. This project will improve the long walk from the parking lots for elderly patrons and those with limited mobility and improve their Library access and Town Hall access.

In addition to protecting patrons, further benefits of this covered walkway are as follows:

Library Director Kirsten Flass said, “Our goal is to protect patrons and taxpayer-funded library books from the weather. We want to keep our patrons, particularly those with mobility issues, safe and comfortable as they access the Library, and we are pleased to offer a well-lit walkway at night.”

This project was funded by Library fundraisers and donations, a gift from the estate of James P. Dunn, a matching NYS Construction Grant for Libraries, and Bullet Aid from Senator Rich Funke.