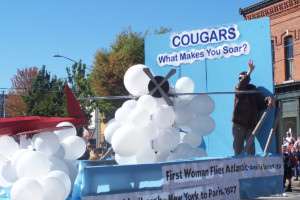 The Manor School float won the Overall Award in the UPK though grade 8 float category at Fall Weekend this year with its “Monumental Moment: depicting the first flights across the Atlantic Ocean by a man and by a woman.

Bright sunshine, not too hot or too cold, a terrific parade with some great floats, a victory by the varsity football team and induction of five new members into the Alumni Hall of Fame, who could ask for anything more for Fall Weekend at Honeoye Falls-Lima.

The Fall Weekend parade at HF-L on October 5 was built around the theme of “Monumental Moments”. Apparently, the 50th anniversary of Apollo 11 landing on the moon this past July was still on many minds as three of the floats showcased that space achievement. The first float built around man landing on the moon was that of Mendon Child Care’s UPK program. Right behind that was the float from Great Expectations in Lima with its interpretation of the first lunar landing. Lima Primary School reached much further back into history as its float showcased the invention of the printing press. Manor School’s float returned to flight asking the question “Cougars, What Makes You Soar?” as it presented the first airplane flights across the Atlantic by Charles Lindbergh and Amelia Earhart. The Middle School Float also took to the sky as it displayed the Wright Brothers flight at Kitty Hawk. The first of the high school floats was that of the freshmen class which presented the opening of the Disney theme parks. The sophomore float utilized the topic of the invention of the internet as its “Monumental Moment”. The Junior Float wasn’t really a traditional float as members of the class held signs stating “Votes for Women”, harkening back to the early 1900s when women marched for the right to vote. The final float was that of the seniors and the Class of 2020 also showcased Apollo 11’s landing on the moon. 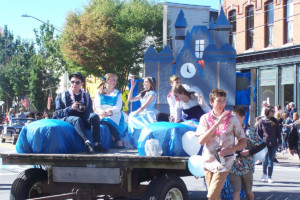 The freshmen float, with its portrayal of the opening of Disney Theme Parks, took first place in the High School float building category at Fall Weekend.

In the UPK through grade 8 category, the judges awarded Lima Primary the Workmanship Award. Great Expectations received the Creativity Award. The Middle School was awarded the Spirit Award. Manor School received the Overall Award. In the high school float category, the junior class float received third place, the seniors second place and the freshmen first place. The sophomore class took home the top bragging rights this year as it won the Grand Prize.

The High School Select Chorus gets ready to perform its last song for an HF-L Alumni Hall of Fame inductee, performing the Joni Mitchell song “The Circle Game” for inductee Julie Ness.

Following the football game, five new members were inducted into the Alumni Hall of Fame during a beautiful reception in the high school’s temporary cafeteria in the “B” wing gym. The five are Daniel Clay (HF-L Class of 1970), Thomas Crego, Jr. (HF-L Class of 1983), Catherine Blodgett Gaffney (HF-L Class of 1985), Lucien Casartelli (HF-L Class of 1986) and Julie Ness (HF-L Class of 1987). For Clay, whose work with farmers in the country of Rwanda has helped improve lives there, the high school Select Choir, under the direction of Ken Goold, sang the song “Africa” by the group Toto. For Crego, whose life has included many acts of giving back to his community, the choir sang “Carry That Weight” by the Beatles. Much of Gaffney’s personal and professional life has revolved around cows, either showing them as part of 4-H when she was growing up on the family farm or now in her work as Vice President of Specialty Cheese, Deli and Cave Cheeses at Wegmans, so it was “udderly hilarious” (pun intended) that the Select Choir sang “The Things I Learned From a Cow”. Casartelli’s professional life has been that of a sculptor and woodworker, so it was appropriate that the Select Choir chose “The Tree” as the song to salute him with. The Select Choir members got the chance to work with Ness, a vocal music teacher and professional singer who has sung both opera roles and, most recently, Joni Mitchell songs, on some of the other numbers during her visit with them the day before, but the choir did not share its song to salute her until the ceremony when it surprised her with Mitchell’s tune “The Circle Game”.