The interior of the Avon Country Barn, a popular venue for weddings. Photo courtesy of Dick Thomas

BY JENNIFER CROWLEY
Last week The Preservation League of New York State released its 2018-19 Seven to Save Endangered Properties List. This list, published bi-annually, aims to draw public attention to the potential loss of precious historic resources that are at-risk primarily due to financial or structural issues. The designation of Wells Barns on this list is significant for current preservation efforts given that between the years of 1886 and 1942, more than 200 barns graced the fields of western New York; today less than 50 of the “country cathedrals” remain.

John Talcott Wells, Sr., had the vision for the truss system that is the central feature to the eponymously named barns. Wells was born near Scottsville in 1843, the son of a barn builder. As an adult, Wells Sr. came to realize that the traditional barn infrastructure of post-and-beam construction for agricultural buildings was not ideal. In fact he was under the impression that the post-and-beam architecture likely led to the premature demise of such structures. 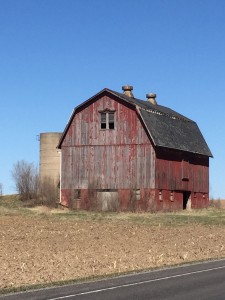 A Wells Barn on North Road in Wheatland; notice the iconic lazy “W” above the double window. Photo courtesy of John Crowley

After essentially experimenting with alternate architectures, Wells focused his efforts on a truss system to strengthen a barn’s interior framing while also creating more open space at the top of a barn. And since the barns were wide open at the ground floor, farmers could drive their wagons directly into their barns, enabling faster loading and unloading. Not surprisingly, in 1889 Wells received a patent for his clever truss design.

Over the next decades, Wells and his three sons did most of their barn building in and around the Wheatland area, but also erected barns in areas of eastern New York, and possibly as far away as Ohio. The last Wells barn was built in 1942. Today the 46 remaining Wells Barns are primarily located in a cluster from the southern tip of Monroe County over throughout Livingston County. According to those steeped in the history of the structures, the exteriors may have variability in their appearances, however the presence of gambrel roofs and a double window with the iconic lazy “W” above it are indicative of the Wells design.

Perhaps the most well-known Wells Barn is the Avon Century Barn located at 1177 West Henrietta Road in Avon. Today the barn, originally built in 1913, serves as a majestic wedding venue. From its soaring cathedral ceiling to gorgeously refinished hardwood floors, the interior of the barn tends to take the breath away of all who step inside to celebrate.

The inclusion of Wells Barns on the Seven to Save list is largely the result of advocacy, education and preservation efforts stemming from the Wells Barn Legacy Project. The Project was borne out of Pittsford resident Katie Andres’ growing interest in the history of the barns. Andres teamed up with Dick Thomas of Caledonia, a rural photographer and former Department of Environmental Conservation officer, Barbara Chapman, the Wheatland Town Historian, and Jill Kuchman, an Emmy Award television professional. Today the four collaborate as the core engine of the Legacy Project.

In addition to their efforts researching and talking about the importance of these stately though oft deteriorating structures within our local communities, the Project is embarking on an ambitious documentary film production. The aim of the Still Standing: The Barns of J.T. Wells & Sons film is to “tell their stories, preserve their history, and foster engagement in their preservation before they are lost.” The Project currently has an Indiegogo crowdfunding campaign underway to secure the funds needed to bring the full-length documentation to completion.

For more information on how to help preserve the legacy of Wells Barns, visit www.wellsbarnhistory.com. To learn about other historic locations named to the 2018-2019 Seven to Save list (these include historic opera houses and the Jamestown Arcade), visit www.preservenys.org.