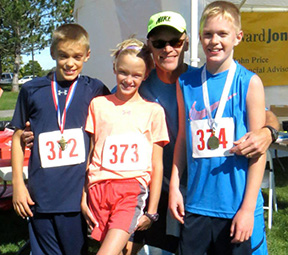 The Vogt family, like many, make the Youth Trophy Cup Runs a tradition each year. With dad Steven, are Samuel, Joel and Joshua. They each have enjoyed success and had great fun at the race festival. 2015 race photo by Bill Krause.

The sun has now shown on the event, quite literally, for twenty consecutive years. Not once has it had to resort to its contingency rain date, a week hence.

The event was begun by Bill Krause. His desire was to expose children to the simple thrill and fulfillment of running, which some might then come to enjoy as a life-long means of fitness and good health. Many have, in fact, gone on to enjoy running on the fine HF-L cross country teams and beyond. Bill Krause was quickly joined in the early years by Bob Dykes. The two, both Honeoye Falls residents, have enjoyed organizing and conducting the festival together every year since.

In its first year, the event was also a travel-soccer fund raiser. In the years since, it has provided funds for local sports programs, including for Manor School physical education supplies. Long-time, local sponsors of the Youth Trophy Cup Runs are Edward Jones, Honeoye Falls MarketPlace, M&T Bank, Molye Chevrolet and Salvatore’s Old Fashioned Pizzeria.

Krause and Dykes and the many volunteers – high school runners and community adults – all delight in the excitement of the day. All draw inspiration each year from witnessing the sheer joy and simplicity of children that just love to run as fast as they can. There are no plays to learn, no formations, no drills or skills-work – just the natural exhilaration found in running.

From its first running in 1997, the formula and format of the event have not changed much. The event name was modified after a year or two, replacing Kid’s Trophy Cup Runs with Youth Trophy Cup Runs. The first year, it was held at the end of the school year, on June 21. That changed the next year when the event took its place as part of the HF-L school’s tradition – its Fall Weekend sports celebration. The race courses, adjusted just a couple of times, were relocated, in 2011, from the High School to the Middle School due to layout changes with the fields and grounds.

What has never changed are the rewards – the yellow finish-line tape, the three great trophy cups with names engraved of every year’s winners, twenty-four children receiving medals for first, second and third, standing on the podium, photos galore, eighty or so children receiving finisher ribbons and having their names and finish times read aloud. Moreover, there is pizza, apples, water and the joy of companionship with schoolmates all celebrating their running accomplishment together. Participants must live in the HF-L school district. All of this is a formula that has been working, without fail, for twenty years.

Registration is on race day, beginning at 12:15 pm, near the auditorium end of the Middle School, or, online at the “Community Programs” link found at www.hflcsd.org. The entry fee is $6 for ages 5 & 6, $9 for ages 7 to12. Fees are a dollar less for online registration.