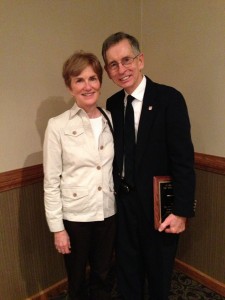 BY DREW SAUR
Our town has lost a great volunteer and citizen.

Barry Quinn, who dutifully served as the President of the Honeoye Falls-Town of Mendon Historical Society from 2002–2016, passed away on February 10th.
Apart from being the organization’s longest-serving President, Barry was the public face of the Historical Society for many years. He graciously oversaw over 130 public programs and gatherings during his tenure. Barry also served as Vice President of the Society from 1997-2001; served on the Program Committee from 2004-2016; and was responsible for the program and membership booklet and museum docent schedules for several years.

Working with Bill Lane, one of Barry’s most significant contributions to our town was to overhaul the relationship between the Historical Society and Museum, which once were separate organizations.

It’s emblematic of Barry’s deep involvement with volunteerism that I first became acquainted with Barry not through the Historical Society, but rather through the first time the Mendon Foundation staged its Black Diamond Express Races that I oversee in the late summer of each year. Barry was the first volunteer to oversee our race turnaround point, which is a lonely job. I think he did it out of a sense of duty to the Lehigh Valley Trail that he and his wife, Martha, could be seen walking quite frequently.

Barry was a true gentleman. He had high standards, as a great engineer should. But even more notably, he was a kind and incredibly compassionate man. He cared deeply about everything he ran. I was fortunate to get to know him, and that he trusted me enough to take the reins of an organization he cared so dearly about. As our Society moves forward, we will take special care to honor his vision for the Society, which I think is best summarized as “sharing history with passion and a smile.”

Many people who only knew Barry from the Historical Society might not know that he also volunteered in significant ways for other organizations. As a US Army Ranger, he served 4 years in Germany and over 25 years in the Reserves. He graduated from the US Army War College in Carlisle, PA prior to retiring as a Colonel. Barry was a well-regarded ceramic and transportation engineer who served as president of NYSATE (New York State Association of Transportation Engineers) as well as president of RES (Rochester Engineering Society). In 2013, Barry was the New York State Association of Transportation Engineers Transportation Professional Engineer of the Year in Section 4, and he won the Statewide award the same year.

RES Administrative Director Lynne Irwin noted of Barry, “If something needed to be done, he was always right there to help. I remember him coming to my husband’s ceremony at RIT when he became a citizen and Barry was president of RES, taking time out of his day to be there for me and my husband. He was a dear friend and will be missed so much by me and so many of us that got to know him.”

There will be a series of events in Barry’s memory at the First Presbyterian Church of Honeoye Falls at 27 N. Main St on the evening of Thursday, February 22nd. This will include a Masonic Service from 5:30-6 PM; a Memorial Service from 6-7 PM; and a reception to follow.

Drew D. Saur serves as the President of both the Honeoye Falls-Town of Mendon Historical Society and the Mendon Foundation.