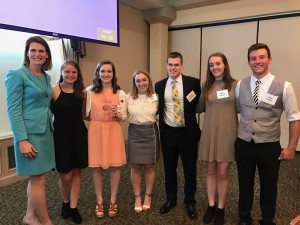 Mary Kate Brushafer of Dansville was one of five local heroes who were recognized by ESL Federal Credit Union and News10 NBC WHEC with a Jefferson Award as Founder and CEO of Santa Hat Society.

Brushafer and four others were presented with the award at an event held last Friday at the Locust Hill Country Club. The event was emceed by Channel 10 News Anchor Rebecca Leclair.

Mary Kate’s vision of Santa Hat Society was created when she was 11 years old. The previous Christmas she watched as a friend’s family suffered an unimaginable tragedy, the death of their father. She wanted to do something to ensure those children were able to experience the joy of the Christmas season. “I thought it would be nice to put a smile on their faces and make it a little less hard,” said Brushafer. Beginning with $40 from her maternal grandmother, she worked to raise the necessary funds which allowed her to place gifts under their tree anonymously.

By the next Christmas, there were other families and children suffering and the whole thing just started snowballing. “These stories keep popping up all over the place with families going through hard troubles,” continued Mary Kate. “People kept asking me if I was going to do it again next year, so if they were willing to donate, I was willing to pay it forward.” In 2014, her vision became a non-profit corporation with IRC Section 501(c)(3) status. Santa Hat Society has its own website and a page on Facebook.

Now as a Junior at Lima Christian School, Mary Kate and her team of elves continue to work year round to raise funds to help make the holidays brighter for families dealing with loss, illness or tragedy. They brought Christmas joy to 34 families last year.
One of the best parts for these elves is the families that they help never know the gifts come from Santa Hat Society. After being purchased and wrapped, the presents make it under the tree with some secret help.

Sal Gerbino is a retired Sergeant with the Gates Police. Beginning in 1980, Sal coordinated law enforcement torch runs in Rochester raising more than $2,000,000. Sal was instrumental in coordinating the first-ever Polar Plunge that raised thousands of dollars to help offset the cost that the special olympians had to bear to attend the Special Olympic Games. This fund-raising event has become a tradition in the Monroe County area for the past 19 years.

Rebecca Leclair read the following text she received from Mary Kate after Gerbino’s story ran on Channel 10 two weeks ago: “I just watched the story about Mr. Gerbino. Oh my goodness! He is such an amazing man. I cannot believe I am being compared to a man who has given so much. I feel so inspired! He makes me want to go help everyone in sight. I am so humbled by this award and so very thankful for the visibility that it has brought to the Santa Hat Society! I cannot wait until Friday to have the opportunity to meet all these inspiring people. Have a great night!”

Dan Lill co-founded R Community Bikes (RCB) in 2005. RCB has grown from an initial bike repair to distributing more than 17,121 bikes and repairing 20,000 more free-of-charge to the Rochester Community. Each donated bike is inspected for safety and is given away with a helmet and lock. Bikes are frequently the most affordable means of transportation to jobs, schools, and churches.

Upon retiring, Rick Keane knew he wanted to volunteer his time and give back to his community. His first wife had passed away from cancer, and he knew first-hand how trying chemotherapy treatments could be. He wanted to help other families in their time of need. He is a Better Day Buddies volunteer. It is a program that provides diversionary activities in the outpatient treatment room for children at Golisano Children’s Hospital at Strong.

Yana Khashper is co-founder and director of ROCovery Fitness, a non-profit dedicated to improving the quality of life for those in recovery from drug and alcohol addiction. As Rochester, NY fights the heroin epidemic, she is the light that shows that recovery is possible. Yana has been selected to represent Rochester and attend the Jefferson Awards National Ceremony in Washington, D. C.

The American Institute for Public Service was founded in 1972 by Jacqueline Kennedy Onassis, U.S. Senator Robert Taft, Jr. and Sam Beard to establish a national recognition for, and encouragement of, outstanding public and community service – The Jefferson Awards. These awards are the country’s longest standing and most prestigious honor of its kind.