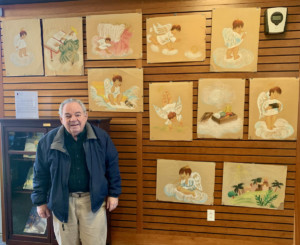 During the month of January, you may be noticing some lovely artwork near the circulation desk of the Mendon Public Library. The story of these pictures goes back 60 years when Mrs. Shirley Besanceney, a new elementary librarian at East Bloomfield and Shortsville schools, asked her husband to help re-create the illustrations by Katherine Evans for a story book, “The Littlest Angel,” written by Charles Tazewell and originally published in 1946.

For the next couple of weeks, Henry “Hank” Besanceney Jr., worked to complete all the drawings in his “studio,” otherwise known as their kitchen table.   As he recalls, “I understand that they were quite a success and the children really enjoyed them.”

Hank rediscovered the artwork this past fall when he came across a large packet of papers while he was rooting around for something else in the attic. “I was  totally surprised when I realized what they were,” Hank said. “First of all, I didn’t know they still existed and I was happy to find that they were still in pretty good shape.”

Hank started painting in his late thirties. Experimenting with a variety of mediums, he enjoyed sketching with various art groups and attended several art classes. It was then that he discovered that the hard and soft chalks known as pastels were his medium of choice. After stepping away from the easel for many years, Hank’s interest in art was renewed about fifteen years ago.

A member of several local art groups, including the recently formed Pastel Society of Western New York, Hank has won numerous awards. As a member of the highly regarded Société de Pastel de l’est du Canada, he was honored to have his paintings accepted for international exhibit in Montreal, Canada in every year his works were submitted.

Semi-retired, Hank combines a studio with his barber shop at 51 West Main St. in Honeoye Falls. In the informal gallery, framed works cover the walls. On an easel opposite his barber chair, in the adjacent room, are the current works in progress, the sketches, and a vast array of colorful pastel chalks required to complete any project.