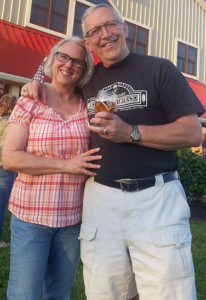 This photo was taken at the 20th anniverary of CB Craft Brewers in 2017. File photo

No crying in your beer this weekend at the farewell party for CB Craft Brewers in Honeoye Falls.

Owner Mike Alcorn said this is a time of celebration despite the fact that the second-oldest craft brewery in Western New York will be shutting its doors effective September 1.

“We want to host everybody one last time and go out with a bang,” he said of the Farewell Party on Friday, August 30 and Saturday, August 31. “There will be music and people can stock up on their favorite beers. We’re coining it as our last hurrah and will be selling some memorabilia. If the weather cooperates, we’ll even take some of the items outside.”

While beer aficionados will miss CB’s unique beers like Caged Alpha Monkey IPA and non-alcohol drinkers will miss the famous Iron Man Root Beer, the area communities of Honeoye Falls, Mendon, Lima and Rush will miss the impact and involvement of both Mike and his wife, Luanne.

The Alcorns have been very supportive of several organizations, both on personal levels and through their business. Organizations such as Rotary, Honeoye Falls Fire Department, Little League and their church have had their helping hands over the last 22 years since they started CB’s in 1997 with the 1,500 square foot warehouse on Paper Mill Street. CB’s moved to its current 10,000 square foot site on Village Square Boulevard in 2008. Events such as Honeoye Falls’ Festival on the Green have also been beneficiaries of the Alcorns’ support in both time and money.

“We have been very involved in the community,” Mike Alcorn said. “We did not do it to be hometown favorites or heroes but truly feel that is what local business people should do.”

CB’s impact on the business level has reached far beyond the borders of Honeoye Falls. When the Alcorns opened the business, it was just the third brewery in Monroe County behind Genesee Brewery and Rohrbach’s (the first craft brewery in Western New York). It has been the incubator for numerous craft breweries in the region. That effect comes from the employees who started there and moved onto other breweries or opened their own and the other craft breweries whom CB’s did contract brewing for such as Three Heads in Rochester, Twisted Rail in Canandaigua and War Horse in Seneca County.

“I think that’s what our legacy is and what history will say is that, to a large extent, we were a pioneer and an incubator for craft brewing in the area,” said Alcorn, whose business went from producing 450 barrels in 1997 to a peak of 9.000 barrels a few years ago. “We brewed their beer and some people who started with us now work at these other places or have opened their own. I am very proud of that.”

CB’s still has 30 accounts for producing private label craft beers for regional restaurants and bars as well as nine different area breweries. All of those contracts will be finished by the end of this week. Alcorn noted that times have changed in the craft brewing industry with two state laws, the Farm Brewery Law in 2012 and the Craft New York Act in 2014, helping smaller entities get into the market. He doesn’t know what will happen to the company’s building as he does not own it, but had a lease-to-own option which he is only halfway through. He also has just a small amount still owed to a bank for the brewing equipment.

“It’s a little crazy time for selling the business,” he stated. “Someone wanting to get in the business right now can go in for a smaller property for $40,000 to $50,000 while when we entered the market, it was $300,000. I truly don’t know what will happen to the intellectual property of CB’s such as the recipes we developed for Caged Alpha Monkey or the Iron Man Root Beer.”

On a personal level, the Alcorns are looking forward to retirement, probably moving to North Carolina.

“We haven’t yet bought a house there, but we are looking,” Alcorn said. “We’ll take the next few months getting our ducks in order here and enjoying the fall and holidays here and then next spring, look to sell our house here and go to North Carolina.”

That retirement is surely well-deserved, but CB’s will always evoke fond memories for many in the community such as this e-mail The Sentinel received:

“As a kid, I remember watching parents snake over to PaperMill during soccer practice,” wrote Peter Pistilli. “As I grew up in this community, so did your business. Your beer was a part of almost every celebration in my life. Custom Brewcrafters has always served as a meeting place for old friends to reconvene as well as a place to go whether it be to celebrate or grieve. You leave behind a legacy that has been permanently engraved into the hearts of this town.”